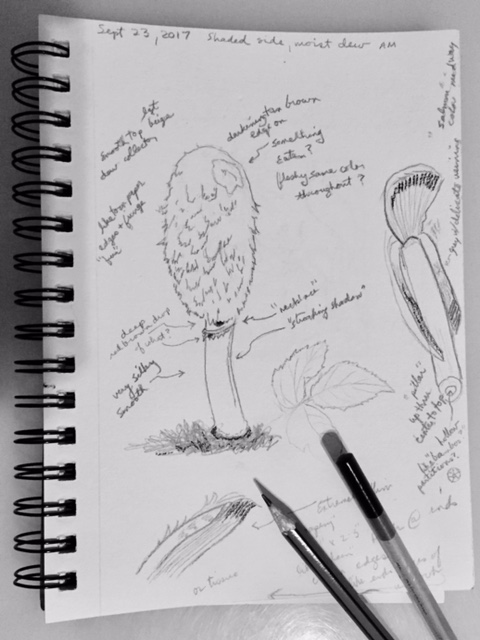 It seems all too easy for modern life to become one continuous rush tainted with frustration and a feeling that there is never enough time to do anything with care and sensitivity.  So it is a very useful practice just to take one’s time.  The truth is that if we can take pleasure in what we do and be mindful, we will find we have more time.  Our relationship with time itself can change.  Time becomes full of life rather than second by second stealing our life away.
~ from  REFLECTIONS ON EVERYDAY LIFE  by Paramananda

All around us seasonal changes are beginning to mark the passage of time and I wonder—have the efficiencies of technology and the urgencies of modern culture’s pace changed our relationship with time itself?  I recently participated in a workshop on nature drawing.  With naught but a couple of charcoal pencils and a sketchbook, I sat down in the dewy morning grass to look at a mushroom.  Twenty minutes passed as we encountered each other.   The feathery white fringe encircling its narrow dome caught miniscule pearls of dew.  Peering under its cap, I discovered a delicate collar necklace draped at an angle around the top of its pristine silk-smooth stalk.  Without disturbing this elegantly turbaned upright specimen, I peered inside another fallen-over comrade to discover a whole ream of filmy, tissue-thin “pages” hidden within its cap.  Only later did I begin to wonder if these caps were already fully formed to remain tall narrow parabolas or whether they were just waiting to open like a parasol being raised.  Had I opted for the instant gratification of a photograph, the phone would hold an image but would I have spent time noticing how the gills inside morphed from charcoal grey to salmon to ecru?  Would I have left any space for wondering how this moment fit into before and after?  Or would this little wonder have flitted in and out of memory in a careless heartbeat?

Things take the time they take.
Don’t worry.
How many roads did Saint Augustine follow
before he became Saint Augustine?
~ “Don’t Worry” by Mary Oliver